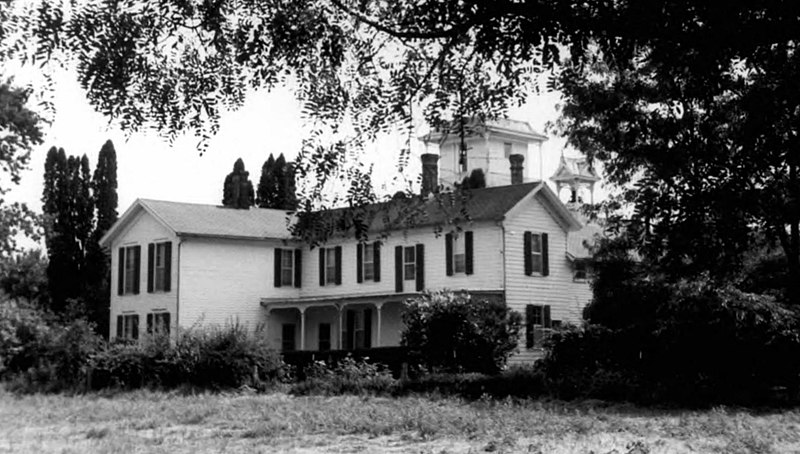 The house on Champoeg Farm was built between 1867-70, by John Hoefer and Casper Zorn. It is a combination of southern and western design, a two-story frame building, consisting of fourteen rooms. The structure has a brick pillar foundation and the pillars are covered with zinc sheeting, to protect the sills from moisture. The fir lumber used in the building was produced on the farm and wrought-iron square nails were used in the construction. In the front part of the house the lumber was planed, tongue and groove, by hand. This building was enlarged in the 1880’s to its present size. In 1896, a bell tower, on the roof at the rear of the house, was added. The bell was to call the farm hands from the field at the noon hour. In the same year, the windmill tower was built. The house was completely furnished; carpeting with large floral designs, heavy drapes, and such furniture as was in use at that period, along with many pioneer articles. The house is in the center of the Robert Newell Donation Land Claim, surrounded by about 950 acres of fertile farm and timber land. The name Champoeg Farm was registered June 9, 1913, in the Marion County Clerk’s office, Salem, Oregon. The reason for naming the farm was to give it an identity. The largest Indian village 17in the Willamette Valley was located here. The French Prairie was known as Champoeg Country. Champoeg District, which extended from the Willamette River to the summit of the Rocky Mountains, was named by the Provisional Government. The first flour mill of 1835, and all succeeding mills were known as the Champoeg mills. The establishment of the first American government on the Pacific Coast occurred here. The townsite of Champoeg was situated on the northwest section of the farm. There were a number of individuals who had a part in the development of the farm by ownership or otherwise, who made history by their courage and determination and who became useful members of a new state. I am mentioning the names of the most prominent: Robert Newell, Donald Manson, William Bailey, Thomas McKay, William Cannon, John Ball, William Johnson, George Laroque, John Hoefer and Casper Zorn. Personally I have owned the farm over fifty-two years. John Hoefer sailed from Europe to New Orleans; the voyage took six weeks before arriving. For two years he worked as a cabinet maker and then he came by wagon train to California and thence to Oregon by steamer, coming to the Champoeg district in 1852. After arrival, he worked as a cabinet maker and carpenter, building houses for the settlers. John Zorn, his two sons, and daughter came from Europe to New York and then to Baraboo, Wisconsin; and after a time, decided the Pacific Northwest was the place to establish their home. They went down the Mississippi River by boat to New Orleans, then by steamer to Panama, across the Isthmus, and then by steamer to California, and from there by steamer to the Oregon country, settling in the Champoeg district in 1854. John Hoefer married Anne, the daughter of John Zorn. Casper Zorn, the older of the two sons, became a partner of John Hoefer. Adam, being a boy, chored around until he became old enough to go on his own. Hoefer and Zorn ran the old tavern, where the Hudson’s Bay Company quarters had been. They also had a bowling alley, at the townsite of Champoeg. All their property was lost during the flood of 1861. On February 3, 1862, Hoefer and Zorn bought the flour and gristmill, which had been damaged by recent flood, repaired it, and operated it for fourteen and one-half years. Then on February 24, 1866, they purchased 146 acres from Robert Newell, and the Champoeg Farm house was built on the present site.