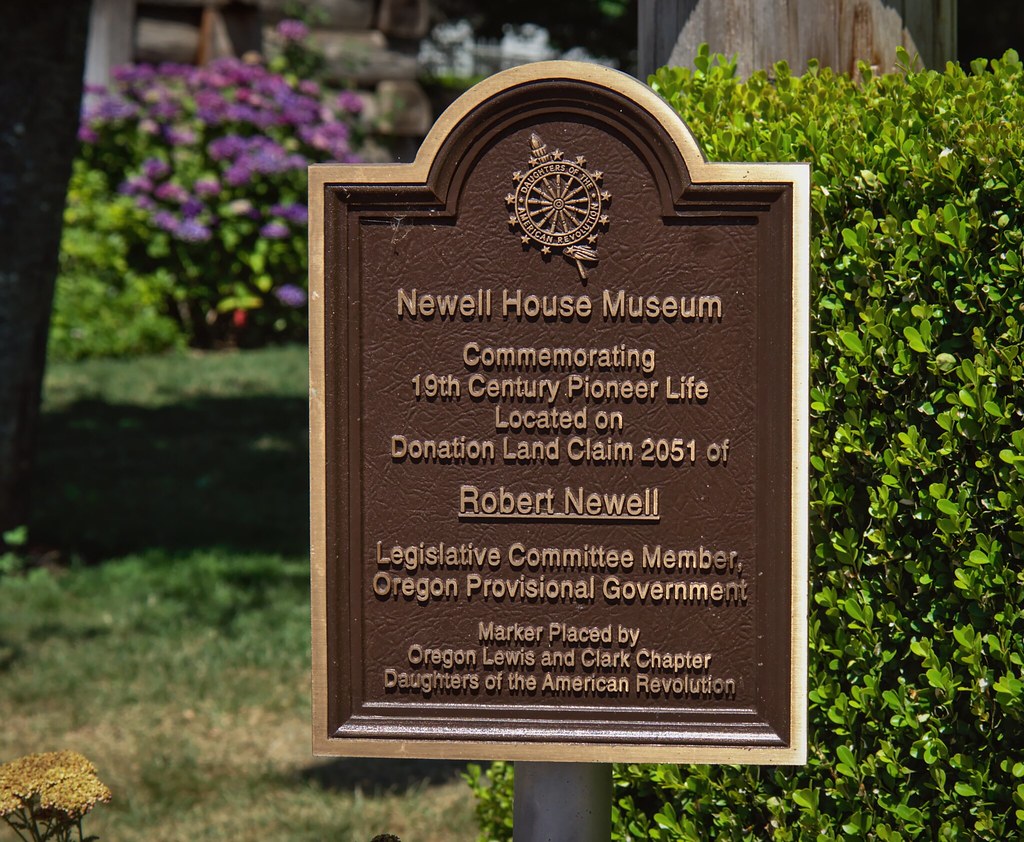 Robert Newell was born in Butler County, Ohio, on March 30, 1807. During his teens, Robert was apprentice to a saddle maker, but never made a saddle of his own. After the death of his father he went to the Rockies at 22
with Joseph Meek, who was a lifelong friend, where he proved himself a legendary mountain man. Robert was so skilled at rudimentary surgery and healing, that he was thereafter called “Doc” Newell even though had no formal medical training. He was known among his colleagues as a fine orator and the “go to” person when the early pioneers were encountering Native American Tribes along the many early journeys west. There are accounts of Robert Newell delegating with tribal leaders while battle was ensuing to discuss options on
both parties moving forward and co-existing. By the end of the Fur Trade Era he had become a famous fur trader, trailblazer, and explorer. His first wife, “Kitty “was the daughter of a Nez Perce sub-chief. They had four sons together. Kitty’s sister was later married to Joseph Meek. With their young families in-tow, these early pioneers were one of the first three families to pave the way for the original Oregon Trail route to the Willamette Valley along the Columbia. In 1842 he and Andre Longtain (a French mountain man who was also
in their party West) jointly platted the Champoeg Town site. Kitty passed away in her 20’s due to a chronic illness in 1845. Her ashes were scattered along the Champoeg creek, near the present site of her gravestone. In 1843 Robert Newell was one who voted for the divide that established the Provisional government that led to Territorial status and Oregon becoming the first state on the west coast. The location of the Champoeg Livery and Grain Store, where the discussions and vote were held is now the current site of the Pioneer
Memorial Pavilion. His second wife was Rebecca Newman of Ohio, was a resident of Champoeg and they married in 1846. Robert and Rebecca built their first home in the Tualitan Plains near Hillsboro, then moved to Oregon City. In 1852, they again moved their family to Champoeg and built the Robert Newell House you see
today. Robert Newell served ably and with distinction during all of Oregon’s early growth. He helped draft all three early Constitutions, was a wealthy, successful businessman and popular civic leader who often entertained at his home. He was a director of the first literary society and the first newspaper. He owned two keel boats that served between Oregon City and Champoeg. He was the first Worshipful Master of the Champoeg Masonic lodge that met in his home. He almost paupered himself helping the victims of the 1861 flood. His house was the only surviving structure at Champoeg. He lived here at Champoeg until 1866, when the Nez Perce Tribe offered him land in Idaho. He was named Nez Perce Indian Agent and moved to Lewiston, Idaho where he became a special commissioner and interpreter to the Nez Perce. He died soon thereafter. Robert Newell is buried at Lewiston, Idaho, where he spent the last years of his life on a 5-acre plot of land which was ceded to him by his Nez Perce friends.